Jan, Tom and Ann Heulens’ nursery is one of the largest and most prominent aubergine farms in Belgium. The family has been working with substrate cubes and slabs from Saint-Gobain Cultilene for many years and is extremely happy with them. “The combination of RootmaXX and OptimaXX helps ensure optimal, constant growth. This – and the technical support we get from Cultilene – enables us to get the most out of our crop.”

The Heulens family in Vremde, a village south-east of Antwerp, has been growing aubergines for almost thirty years. “My parents and my brother Tom switched from growing tomatoes to aubergines in 1993,” says Jan Heulens. “I started my own aubergine business in 1994, near my parents’ nursery. The two operations merged later on, and today I run the business jointly with Tom and our sister Ann.”

The Heulens family nursery covers 7.5 hectares, making it the biggest aubergine farm in Belgium. “There are about 30 hectares of aubergines in the whole of Belgium,” says the grower, who grows the Tracey variety. “For the past few years, we have been planting on around 20 December. This enables us to harvest from February to late October, early November.”

The aubergines are sold through the BelOrta auction. “But we are looking into whether we could start handling our own sales more in the future. To do that, you really need to be able to differentiate yourself, though – for example by maximising your sustainability credentials – and set up your own sales organisation. So it’s pretty demanding.”

The growers have been using Cultilene substrate cubes and slabs for over 20 years. “I still remember exactly why we chose Cultilene at the time,” Heulens laughs. “It was mainly because the slabs were delivered in perfect condition; they were almost entirely undamaged. You could tell that a lot of care went into them. They also produced a very uniform crop, plus the product was attractively priced.”

Today, the Heulens family uses a combination of RootmaXX cubes and OptimaXX slabs. “We have been working with RootmaXX for around three or four years. The big advantage is that you get a lot of roots forming quickly in the cube. We put the cubes from the plant breeder straight onto the slabs. Then we get incredibly fast root penetration into the slab. That’s an important advantage.”

According to Heulens, the roots also spread out very well through the OptimaXX slabs. “They branch out at the top first and slowly grow downwards. To begin with, we went for 7.5 cm high slabs, but now we use 10 cm ones. The top layer in these slabs stays drier, so it contains more oxygen. And that benefits root penetration. Another advantage of OptimaXX is that water distribution, water content and EC are perfectly controllable.” 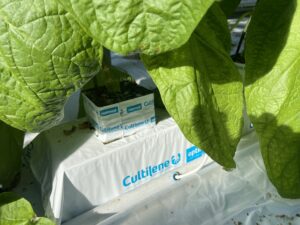 The good root penetration and distribution also has a positive impact on crop development, the grower says. It ensures better and more consistent growth, for example. “And that in turn makes for more uniform production, particularly in the summer. You often see production peaks in aubergines at that time of year, but we don’t get them here. That’s also an advantage in terms of sales and labour input.”

Heulens also reports that water distributes evenly through OptimaXX slabs and they don’t easily get too wet. “This has to do with the structure and the height of the slab. A substrate that is too wet is a risk factor in aubergine cultivation, especially in the spring and autumn. If the plants get too much water at these times of year, the crop turns yellow, gets out of balance and production slows. With our slabs and a smart irrigation strategy, we can prevent that.”

Although many aubergine growers are choosing to grow on perlite these days, the Belgian grower sees no reason to switch to a different substrate. “With the combination of RootmaXX and OptimaXX, we have mastered our cultivation strategy perfectly and are able to get the most out of the crop with it. Never change a winning team!”

The support Cultilene provides also helps Heulens to optimise their substrate-grown crops. “The Cultilene specialists, who visit regularly, are incredibly knowledgeable. We appreciate that – it’s worth a lot to us.”

Little support
Further expansion of the business is not in the pipeline for the time being, for two reasons. Firstly, they don’t yet have a successor lined up, and secondly, there is no option to expand at their current sites. According to Heulens, it is very difficult to grow as a greenhouse operation in Belgium anyway. “That’s partly because of the nitrogen debate, but also because of objections from local residents, nature groups, and so on. There is little support for the greenhouse horticulture sector; this is perhaps our biggest threat going forward.”

High energy prices are less of an issue for the grower. “Yes, gas prices are high, but we can largely compensate for that with our CHP system: we also get a decent price for the electricity we feed back into the grid.”

Poor prices
Heulens hopes that aubergine prices will pick up again in the coming years. 2021 was the worst year ever in terms of pricing, he says. “Our aubergines were going for 15 to 20 cents per kilo. That’s insanely low. The low prices were mainly due to an expansion of the acreage in Spain and the fact that the summer wasn’t so hot. That meant that the Spanish spring crop could go on for longer. It remains to be seen how this coming year will turn out; fortunately there’s little sign of the acreage in the Netherlands and Belgium expanding. So we remain positive; it can’t get much worse than last year. And with Cultilene’s products and support, at least we have a solid foundation in terms of substrate. That fills us with confidence!”