As a producer of vine and loose tomatoes, now with 4 hectares under glass, Jean-René Briand is an innovative grower. During the summer of 2016, he set up 8000 m² of greenhouses with light from sodium lamps (HPS) combined with LED lighting, from the company Hortilux. “The demand for tomatoes is becoming increasingly important during the winter,” he says. “As a relatively small supplier to the Océane cooperative I decided to install lights in 8000 m² so that I can harvest tomatoes from November until the end of August. My aim is to produce up to 85 kg/m², with 30 kg from November to April, to take advantage of the higher prices during this specific sales period.”
To bring both heat and light to the top of the plants, he chose  a hybrid lighting solution combining HPS lamps and LED lighting. He opted for Hortilux Inter LED lights, in particular because HORTILED lamps have a diffused reflector – which directs the light diagonally towards the crop – and a polycarbonate envelope around the LEDs, which protects the leaves.

Good oxygenation for the roots
To repay this investment, which doubles the cost of a greenhouse, Jean-René has to do everything he can to maximise his yield. In this, his first year, he chose the very high yielding truss variety Merlice. And, after having trialled Merlice on one hectare in 2015-2016, he now uses Exact Air slabs and RootmaXX blocks on all his 4 hectares. ‘The root system is the heart of a plant,’ he says. ‘You can have a very high-performance greenhouse, but if you don’t optimise the root systems, the yield will suffer.’ Right from their delivery and inter-planting, Jean-René Briand was pleasantly surprised by RootmaXX cubes. ‘The technology of the crossed fibres means that the roots fill the whole of the block. When inter-planting, we noticed the number of small roots throughout the whole block. We saw an even more spectacular result at planting. And, during the season, the roots spread through the whole of the block, with no sign of water roots. This was even more pronounced in the lit greenhouse, where development was much faster.’ On the advice of Cultilene, Briand adjusted the irrigation strategy from the first growing season. ‘I now apply smaller quantities of water but more frequently. With the Exact Air slabs, you can bring the water content right down, to allow good oxygenation of the roots, and then very easily raise the water content to the target water content level again. At the same time the EC-levels remain very stable, even when the water content is reduced a lot in the slabs.’
In 2015-2016, the grower managed a yield of 65 kg/m² in the 1 ha greenhouse where the new cubes and slabs were being trialed. In comparison, with one week’s difference in the planting date, and using another type of slab, the yield in his older 1 ha greenhouse, was 62kg/m². 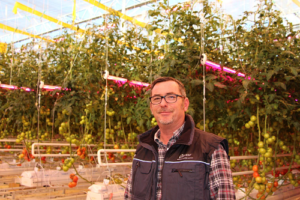 DWL Slab monitoring system as a decision-making tool
This season, Jean-René Briand chose slabs 1.33 m long, 15 cm wide and 10 cm high for the majority of his nursery. However, for the lit area he chose slabs 90 cm long , 15 cm width and 10 cm high . ‘In this greenhouse, because of the lighting, the crop density is higher, which is why we use slabs of this size. ‘Good Drainage is very important under such conditions, more drainage slits were added than were used before, about one per plant rather than one or two per slab.’ Recently, he has also had a DWL Slab monitoring system installed, as suggested by Cultilene as part of their “Smart Root Zone Management” consultation package. ‘We can already track the water content of the slabs with sensor-based moisture measurements and through hand measurements. But I now want more precise monitoring. The DWL will give us exact measurements on water content, EC, temperature and drainage from a 20 m length of the gutter . Cultilene will have access to this data and will therefore be able to advise us on correct and efficient water usage.’

“The roots fill the whole of the slab”